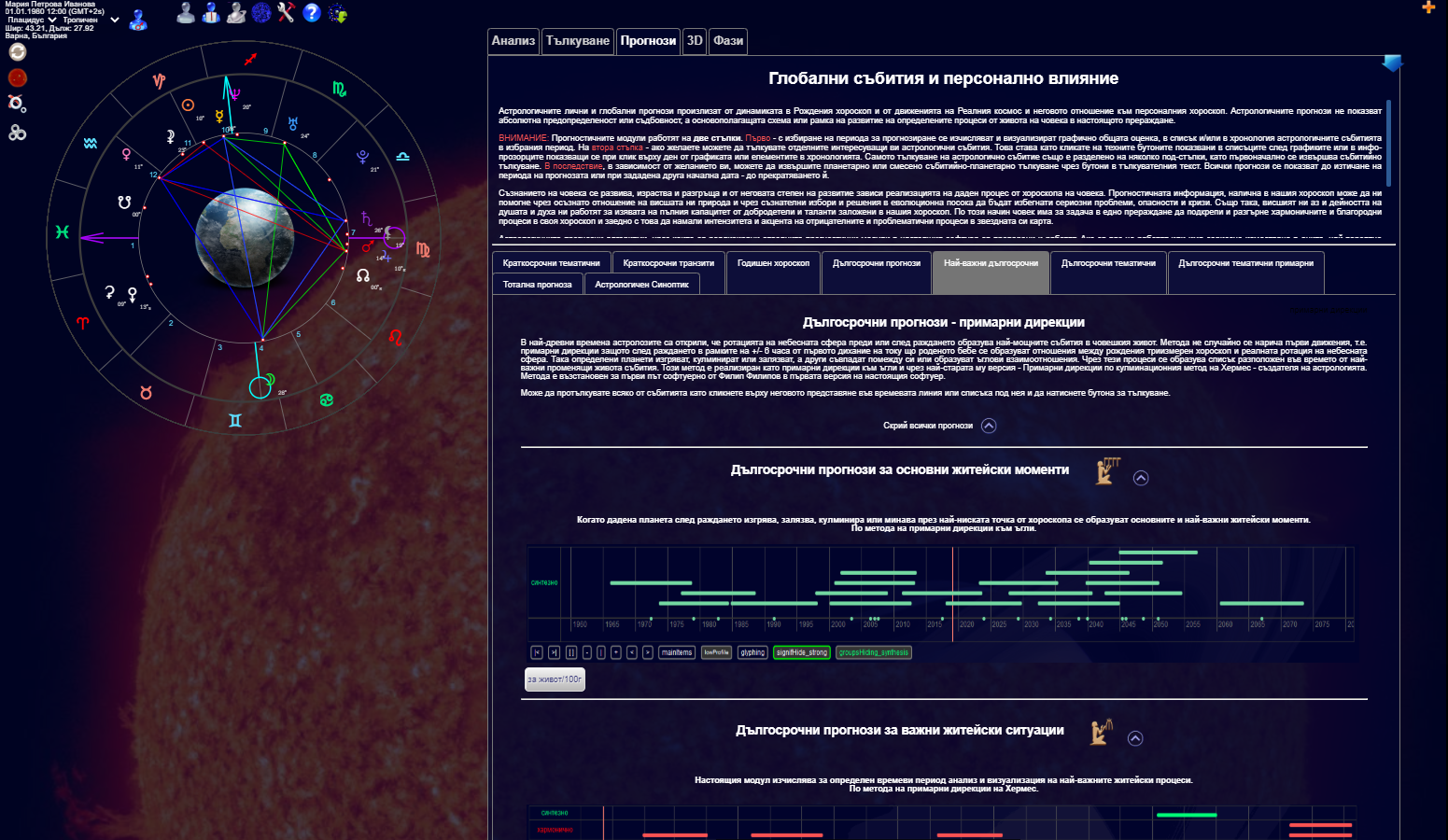 What is the most powerful and important prognostic method in Astrology?

QUESTION: What is the most powerful and important prognostic method in Astrology?

ANSWER: Primary directions are the basic method of prognosis. From them arose the various kinds of zodiacal directions, as a kind of simplification of the Primary ones. Primary directions are so named because they are formed by the first movement of the horoscope - 6 hours before and after your birth are projected 90 years of your life based on the actual rotation of the Earth around its axis. Zodiac directions have no real movement to form them and therefore, they are not a basic primary method of forecasting, but a secondary method, but still a useful forecasting method for practice. Progressions are also a secondary method, because their program is realized about 100 days after your birth - day by day, because as you know their key is one day equals one year of your life. The primary directions work with several different keys, but all based on the idea that 1 degree from the celestial sphere corresponds to 1 year of human life, with this one degree culminating in MC in about 4 minutes. Therefore, 360 minutes pass in 6 hours, which encodes 90 years (6 * 60 = 360, 360/4 = 90).

The primary directions have a different definition of what constitutes a coincidence between two objects, which determines a different idea of ​​what is an aspect in general in the primary directions. In the classical method of Ptolemy and Placidus, you have a coincidence between two planets when one planet that moves relative to the other planet falls in the same proportion in the house where the other planet is, setting that same proportion. In other words, if you want to see when one of the directions showing the dangers of life and probable death abroad will occur: Saturn directed to coincide with the Sun in the 9th house, for example, you must first see in what proportion the three-dimensional 9th ​​house divides the Sun in your three-dimensional horoscope and then, driving Saturn towards the Sun in its arc of motion in the three-dimensional sphere, you must find out when Saturn will divide the three-dimensional 9 house in the same ratio that the Sun has set. Then you will have a Saturn conjunction Sun according to the Primary Directorate by the method of Ptolemy-Placidus. However, if you want to know when Venus sets you on the Descendant and makes you a classic Marriage Directorate, you need to calculate the rainbow that Venus travels to sunset again in its three-dimensional horoscope. However, if you want to calculate the Saturn conjunction Sun by the culmination method of Hermes, the creator of Astrology - you need to find the Right Ascension of the two planets and distinguish between them and reverse the age difference on a Primary directional key you prefer. This will give you another time for Saturn to coincide with the Sun, because according to Hermes' method, a coincidence is present when, due to the rotation of the celestial sphere relative to the sphere of your horoscope, the two planets stand on the same celestial meridian. After all this, you can come to the conclusion that you need a conscious study of three-dimensional astrology to make sense of celestial dynamics. You also need quality astrological software for three-dimensional astrology and primary directions.

There are two in the world. The first is Placidus by Rumen Kolev, who works with the classical primary directions and has an extremely rich arsenal of types of primary directions, unfortunately without interpretation. The second is Astramen.com and is available online and in it you have Primary Directions to the Corners and Primary Directions according to the culmination method of Hermes, all of which allow you to get a timeline with events for 100 years, and each aspect of this chronology you can you interpret with tens and even hundreds of pages a text in Bulgarian language and thematic interpretation on 25 topics or 5 spheres of life. The fact that you have two most powerful software for Primary directions, created by Bulgarians in Bulgaria (Varna), proves that the Bulgarian Astrological School is the most advanced in the world in the field of the most powerful and ancient method of forecasting - Primary Directions, which require three-dimensional and even four-dimensional thinking in Astrology. You will probably ask, "Why four-dimensional thinking?" Primary directions are practically a four-dimensional prognostic method, because you have a three-dimensional sphere that you drive in time - the fourth dimension.