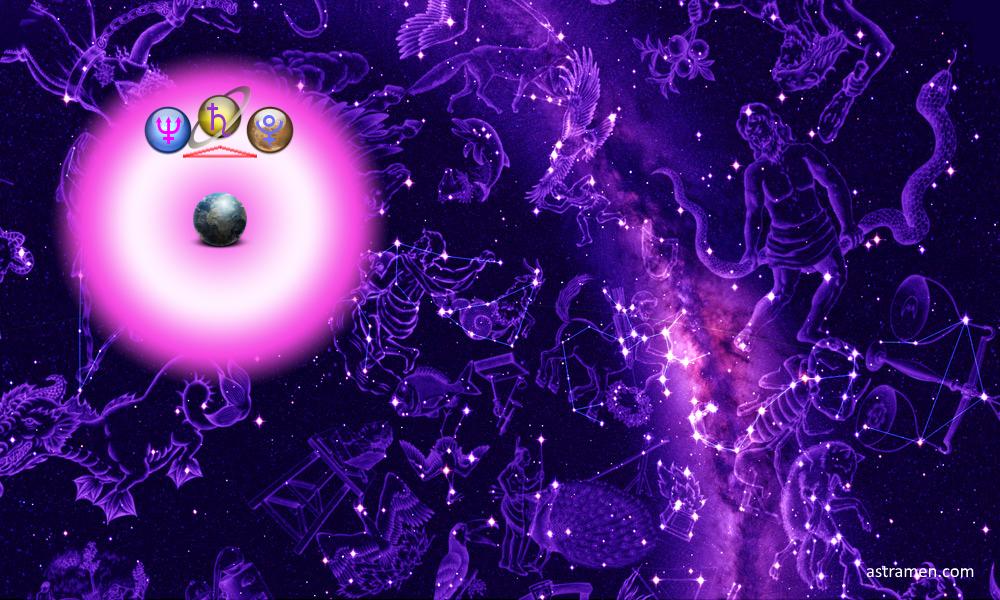 The celestial shape Roof that is triggered in the period referred to above shows weak harmonious and good cosmic energies. This shape in the astral world is accomplished when, viewed geocentrically in the local Cosmos, combinations occur between three luminaries, planets or other important cosmic factors. The triple combination symbolizes the specific relation between thought, feeling and will-power expressed by the planets.

In this celestial event the connections between these planets have the following angular sequence: 30°-30°-60° or Pluto (P) i Saturn (U) i Neptune (O) t←.

In a global sense, Saturn, with its vibrations, often refers to the value system and morality of society, as well as to the earthly goods and resources, but also to the poor and underprivileged strata of society, and also to the natural vehement forces of the Earth. Neptune's involvement brings a social emphasis on the configuration and even a mystical flavour into the cosmic situation; however, often Neptune enhances the influence of the Cosmos on water elements and vehement forces, and all phenomena associated with them. Pluto shows some of the most complex, secretive and somewhat destructive and dangerous energies in human society. It often triggers large-scale energy issues and also everything related to radiation and major devastating vehement mighty forces.