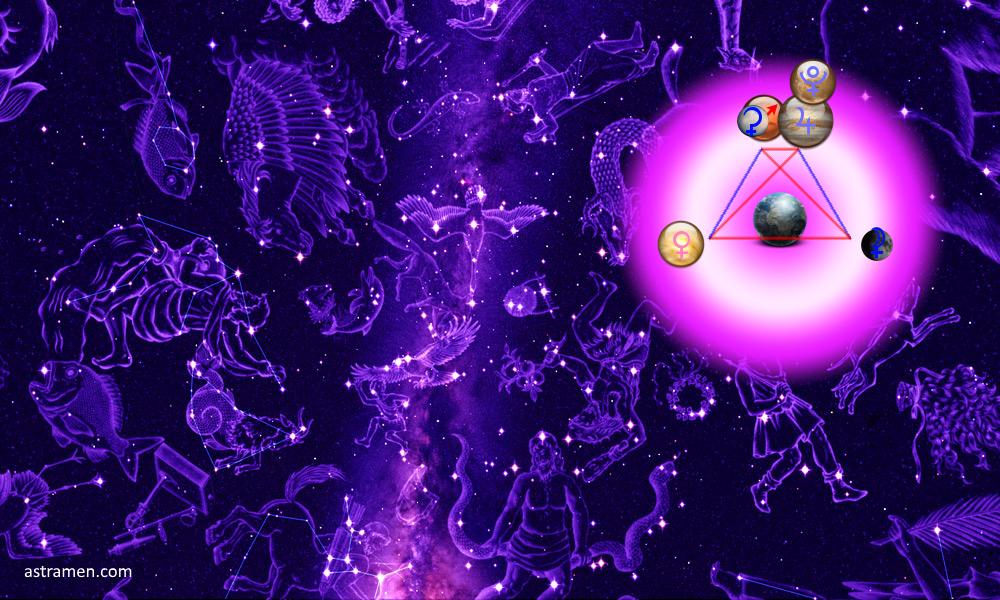 The structure of aspects in the solar system Rug, that happens in the period described in the title, shows medium transforming cosmic energies. This geometric structure manifests, when looked from Earth in the solar system connections take place between six luminaries, planets or other important cosmic factors. The sixfold relationship between the celestial factors shows impulse to perfection expressed by the Cosmos.

The form of this space composition is trapezoid. When the universe forms a trapezoid in the starry sky, it shows the aspiration of energies to peak in their manifestation.

The sighted configuration is happening relatively rarely in the universe, and it shows that Living Intelligent Nature works in a unique way on the fates of all beings on the face of the Earth.

As this structure of aspects in the solar system has symmetry, this means that cosmic vibrations carry a hidden beauty and are subject to mastering because they serve the principle of the Truth.

In a global sense, When Venus engages in cosmic configurations with its energies, this always has a strong influence on women, the arts and financial institutions. The presence of Mars energy in a cosmic figure is most often a sign of dangerous, military, destructive processes unfortunately, and at best a sign of the manifestation of masculinity in the world. Jupiter always shows the spiritual, political and legal processes in the socio and probably they will be very active during the activity of the described configuration. Pluto shows some of the most complex, secretive and somewhat destructive and dangerous energies in human society. It often triggers large-scale energy issues and also everything related to radiation and major devastating elements.