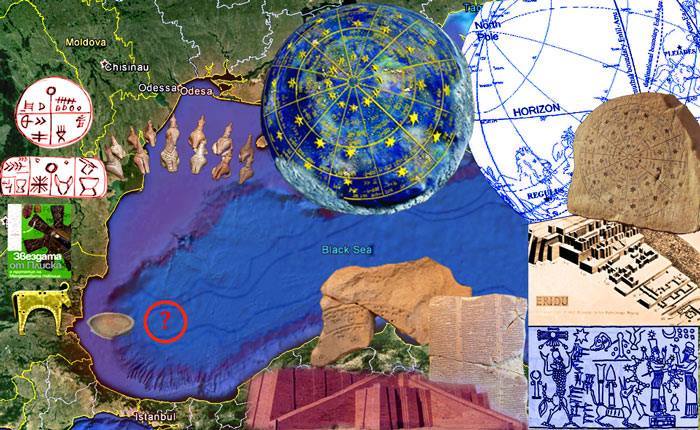 In most ancient times, when humans were created, everything happening in their world was being recorded, and now this universal memory affects them. In each of the signs, different events were being imprinted, different epochs and cycles of the Earth’s history. Just as in a computer disk the information is distributed in different sectors, the same way in the universal memory the records are arranged at certain levels, which we perceive in the different constellations. Greeks, Egyptians, Persians, and Indians have had different legends, and hence – different constellations, which underwent changes in different epochs and eras. However, it must be understood that they all rest upon one ancient unchanging foundation. This foundation is the history of the development of humans and of the Earth. For each different epoch, a new astrological system was needed to meet the new specific conditions. That is why there are differences between the celestial constellations in the different cultural epochs as well.

Astrology in the past was different from Astrology as we see it today. In ancient times, people saw, through a specific sleep-like state of clairvoyance, the various influences of planets in the form of various scenes from the life of higher Beings: the so-called “Gods”. And today our consciousness has changed. Contemporary humans have acquired a clear specific, concrete consciousness, however – at the expense of their distancing from the Spiritual World and its influences. That is why some of our contemporaries, while observing the constellations in the sky, at first glance grasp nothing, likening everything to random chaos. However, this is not the case. Everything in the legendary system of constellations corresponds to certain processes and phenomena of the Spiritual World referring to the recent 2 or 3 thousand years. This can be understood from the fact that Christ Himself, Who is the supreme leader of the whole Star Wisdom in the Solar System, has lived a life in which a series of stages is clearly observed, relating by analogy to the position of the signs at that time and in the present.

In ancient times, the Star Science was studied in the temples of Wisdom, where only a few elect were initiated, often becoming kings, priestesses, rulers, counsellors, and in general – people, more or less ruling entire nations and states. At that time, Astrology was a method and instrument by which rulers synchronized themselves with the Heavenly Decrees and guided their peoples. In those days, Astrology had not yet become a specific personality science, as we know it today.

It was only when humans became more and more immersed in matter and individualized to an extreme degree that they adapted also Astrology to their personal interests. In the past, astrologers studied celestial phenomena of the Divine World through various revelations that reached them through a kind of clairvoyance similar to a sleeping dream state, and also through various calculations proving the visions with mathematical accuracy. However, gradually, fewer and fewer people were able to do so, because conditions changed and humans were required to acquire the new qualities of waking, external and specific, concrete consciousness. However, they could not develop themselves fully under the old conditions. Therefore, these methods of work have gradually disappeared. Today, astrologers rely mainly on calculations, on their own mind, which processes and sorts information, and sometimes – also on intuition.

Here, something else should also be understood. When the basis of Ancient Astrology – visions of the life of the various Deities – fell away and ceased to exist, it began to be transmitted mainly by tradition. Two significant dangers arose in it: on the one hand, it might cease to exist as a true science and become a vague abstraction, transmitted by obscure, old traditions and books, and on the other hand, it might begin to be perceived as a fatalistic soothsayer turning people into machines, deprived of their own will, unconditionally subordinate to a vague but rigid destiny, which, for unknown reasons, at one moment rewards, while at another weakens and limits. In ancient times, when humankind descended from the heights of the Spiritual and Collective Consciousness towards the concreteness of matter and the limited ego, Astrology followed this path – the path of involution. This is how things went this far – to modern individual horoscopes, serving personal, selfish interests.

The descent of Christ marks the beginning of the evolution of humankind – the way up: from material consciousness to Higher Spirituality, from superstition to true faith and knowledge, from personality to Cosmic Super-Consciousness, from the fragmented interests of the ego to the united fraternal life of all awake souls. True to its deep, Spiritual Origins, Astrology has to follow this Cosmic Rhythm.

Today, when people have already left the dark times of the Middle Ages, the storms of destructive wars, the cold hatred of class opposition, and with an increasingly liberated consciousness and worldview are turning towards Spirituality, it is time for Astrology to outgrow the shackles of narrow, constricted selfish interests. It ought to promote a deep, Cosmic Self-Knowledge that assists the uplifting and liberation of the human soul.

Astrology is already based on strictly scientific research. Combining science and Spirituality into a living synthesis, it is about to become a true science of the new age, and even more: in the new Age of Aquarius (and the Star Science unfolds under the sign of Aquarius), Astrology will reach extraordinary heights in its development. People will come who will prove its accuracy and will help Astrology go even deeper into our lives.

THIS ARTICLE IS TO BE CONTINUED WITH A SERIOUS EXTENSION...