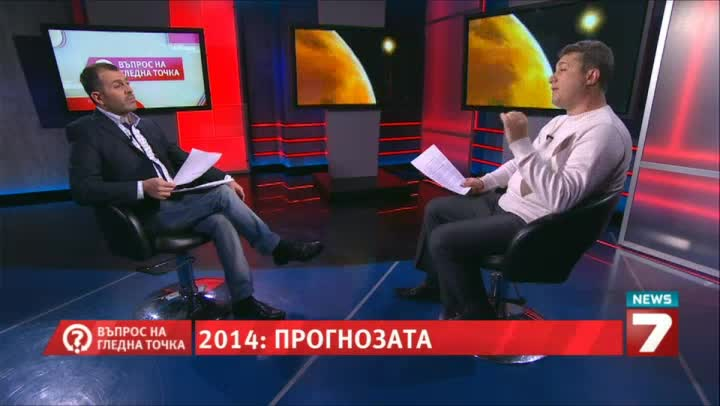 A year awaits us with religious cataclysms, political problems and trials before those in power around the world
https://www.youtube.com/watch?v=KTE-Q-QYBzE

Astrologer Filip Filipov, who predicted the earthquake in Pernik and the attack in Sarafovo , is a guest in "Question of Perspective" with an astrological forecast for 2014 worldwide and specifically for Bulgaria .

For a long period of time on a series of several dates between February 11 and March 30, there is a rather strange stellar configuration, which shows a crisis situation, said Filipov. According to him, there is a danger of a crisis in the country due to influence from abroad, especially on financial issues.

There will be serious meteorological problems in the whole country. At the end of April there is a solar eclipse and Bulgaria may get a positive result from strange and not very favorable events, Filipov noted.

Globally, a year of religious upheavals, political problems and trials awaits us . However, it will not be as negatively charged as the upcoming 2013