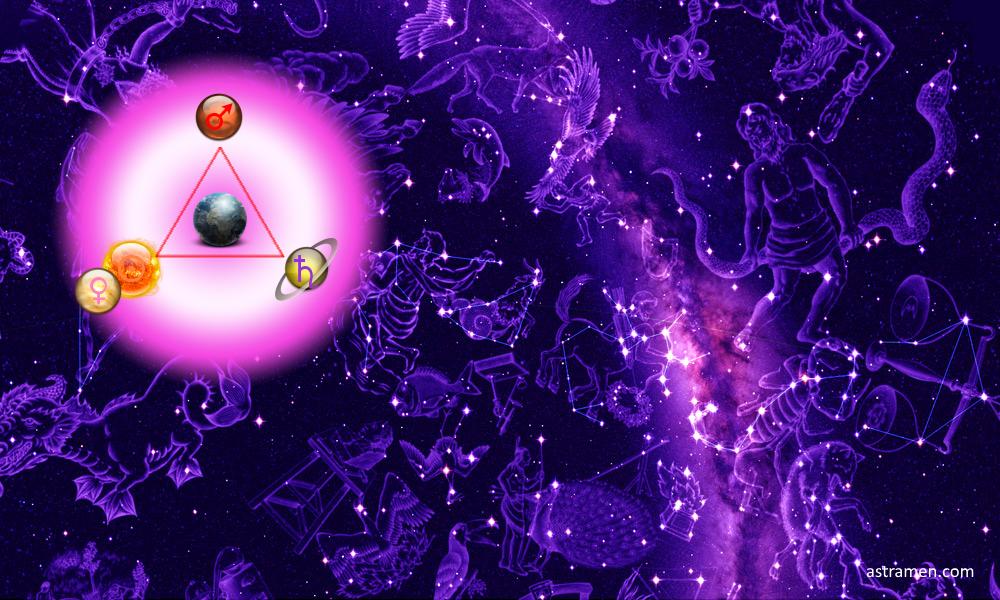 In the period 11-15.10, a Grand Trine is realized in the sky between the Sun's conjunction with the planet of Love - Venus, Saturn - the ruler of karma, which will soon come out of retrograde, and Mars, which is preparing for retrograde. This shows that globally there will be a chance for military processes to moderate if humanity regulates the ego strength of political leaders. If this conscious action of the peoples does not materialize and manifest itself as mass-scale protests and spiritual efforts against the war, this trine will add more fuel to the military conflict. The climax will be on the 14-15.10+-1 day, when the Moon will maximize this celestial configuration and conjunct Mars and Neptune, indicating a possible serious naval attack or a major water disaster or incident, as well as a possible severe storm affecting coastal regions.

On a personal level, this combination brings positive support to all intelligent souls who want to overcome old conflicts through the forces of Goodness and Love. This heavenly figure helps in the love and partnership plan especially to the people who fall under its direct influence. Love can flare powerfully and unexpectedly because of old and deep connections between souls. This is not war, but supreme harmony.

If you want to check how this good Grand Trine figure affects you, go to the link: https://astramen.com/k/1262765 and see the influence for yourself according to your birth chart. Do not forget to also check the graphs of love, profession and partner relationships at the link: https://astramen.com/prognosis and if there are highs and long-lasting plateaus above zero on the graphs in the above-described period - this is a good sign and you should you use it for attunement on life themes depicted in the charts.
The will of the Cosmic Man is aimed at perfect harmony among all the peoples who are organs of planet Earth, not at destructive war. Who will oppose the Will of the Space Man? What will be the consequences of this stubbornness and resistance? These are rhetorical questions...