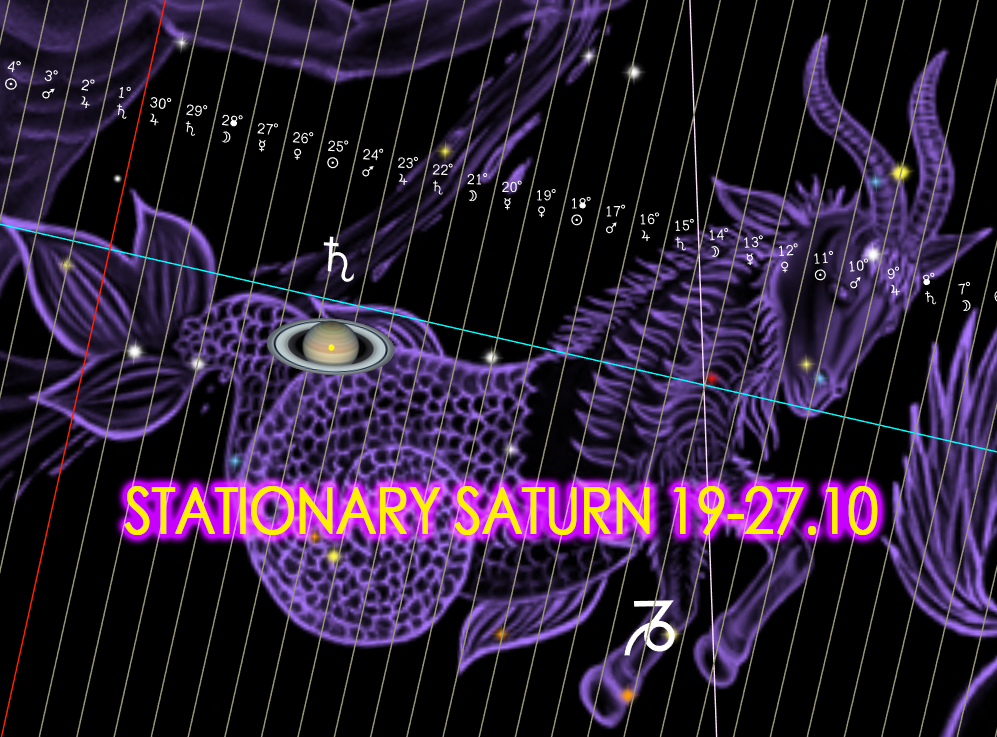 SATURN STOPS ITS MOTION IN STATIONARY PHASE AND THIS MARKS THE POLITICAL LIFE OF BULGARIA AGAIN. SEE HOW STATIONARY SATURN AFFECTS YOU

Many people have heard of Mercury retrograde, but very few know that planets also have a STATIONARY PHASE that is much more important than retrograde. From 19 to 27.10 Saturn is STATIONARY and this strongly influences people's lives and world events. The planet Saturn is one of the most powerful planets in the solar system, which rules the following themes in life: wisdom, fulfilling our mission in life, destiny, karma, value system, philosophical and scientific vision, construction and mining activities, elders, scientists, monks, the socially weak, old people, philosophical thought and scientific development of man and nations, boundaries and structures of countries. On all these subjects there may be sudden and surprising changes, strange manoeuvres, a temporary halt to find a new direction, or a brief calm before a storm.

On a personal level, for example, when stationary Saturn is in a very important place in a person's horoscope, important fateful events, sudden changes in life, health, life status or profession are realized. If you want to check if your horoscope is activated, log in to your Astramen.com software account at: https://astramen.com/vhod (if you haven't registered yet, log in here: https://astramen.com/registracia and register), then click on the link: https://astramen.com/phases or on the PHASES tab, scroll to see the phases that are currently taking place. There you will see the STATIONARY SATURN phase check button, by clicking it you will be able to get a special analysis personally for you and your horoscope. I recommend doing this on a laptop or computer so you can have normal and full access to the information and resources I have created for you.
Be sure to also check out the health, risk, occupation, and partnership charts at the link: https://astramen.com/prognosis and if there are lows and long lasting lows below zero on the charts, as well as zero crossings in the period described above, it indicates that you need to beware of the particular topic you are researching.

An interesting phenomenon was realized on this Stationarity in Bulgaria - the country under the strong influence of Saturn. On 9.06 this year, I wrote a post with the title, "IT WAS ENOUGH TO START THE LUNAR MONTH WITH STATIONARY SATURN AND STATIONARY MERCURY AND THE GOVERNMENT IS RIGHT OUT OF THE WAY", referring to S. Trifonov's departure from the quadruple coalition. The key point at the moment is that the election for this parliament was made on Stationary Mercury and the parliament worked on Stationary Saturn, which is a startling synchronicity showing that Bulgaria is being deliberately led towards political instability by certain forces intent on making one of the biggest heists AGAIN in our country's history by increasingly bankrupting the country in the face of a severe financial, energy and military crisis. Here the patent for these activities is held by the person Soros, who has again installed his protégés in Bulgarian politics, and who are now visibly destabilizing the country financially. Think about it and ask yourselves who are the Soros protégés who have come in the fast track as poorly prepared paratroopers... The last time these external forces bankrupted the state, drained the pension funds and sold off enterprises at no price.

On a global scale, major fateful events are possible in the lives of nations. Riots and mass protests by people impoverished by the energy crisis all over the world. Political excesses in countries with problematic histories, such as the USA, England, Belgium, France, Russia and other former and current empires, which could suffer a staggering collapse or major reversals in political and governance developments in the coming months. Mine problems and dangerous cave-ins as well as seismic events are possible. An abrupt change in scientific beliefs in any area of science is very possible. Of course, this combination was instantly used by Putin's astrological team to impose martial law in the border annexed republics, since it is the border processes that are under Saturn's influence and he rules all introductory restriction laws as well, and martial law is just such a law.

The Stationary Phase is a dynamic process that is formed when the planet Saturn as seen from Earth seems to stop and its speed of movement through the Zodiac decreases significantly and even becomes equal to 0 in the period 22-24.10. All the planets except the Sun and Moon have similar movements, and in this month there are 2 stationary planets around the Solar Eclipse(there will be a special post on this), which shows that this month and the next are really fateful! At times like this, all the subjects of life that are under the rulership of the planet Saturn are in a problematic or crisis situation, much stronger than the retrograde influence of this same planet. The events that occur are many times more powerful than those that are present during Mercury retrograde or stationary. And this is further reinforced by the fact that there is a solar partial eclipse visible from Bulgaria on 10/25, and Mars stationarity begins on 10/26.

In summary, I can say that every spiritually oriented person should harness the alchemically powerful energy coming from the Solar System and working deep within the causal levels of our consciousness at such times, because Saturn is directly connected to our Causal Body - the Body of Destiny, karma and our personal horoscope in this incarnation. We are called to outgrow negative processes and bring about a conscious change for the better to harmonize the karmic dynamics in our lives and the lives of humanity. This is especially effective through the Collective Prayer currently in effect at 12:00 noon BST. By participating in these spiritual processes, we will prove that we are intelligent beings seeking the fulfillment of the Will of God in our lives, especially at this very dangerous time for the evolution of the planet.