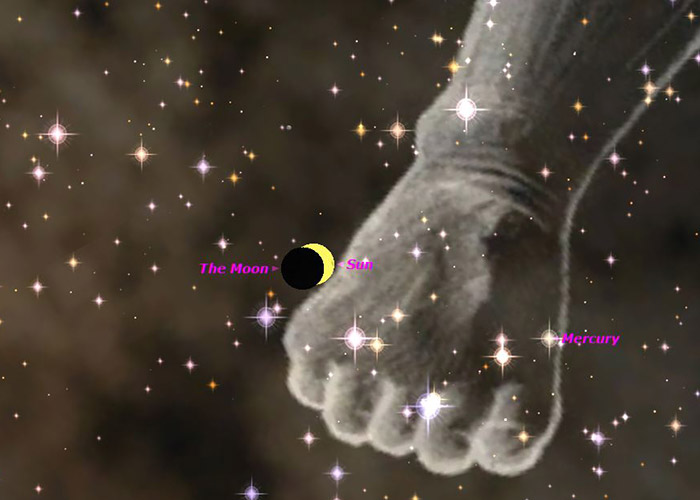 SOLAR ECLIPSE IN THE BACKGROUND OF THE GALACTIC CENTER

On December 14, after the Eclipse of Venus and Mercury, a Total Solar Eclipse is realized, visible from South America and partly from Africa. This eclipse occurs against the background of the Galactic Central Sun - Alfiola during the phase coincidence of the Sun with Alfiola, and more precisely on the Right Foot of the Cosmic Healer - the constellation Serpent Bearer. All the eclipses taking place against the background of the Galactic Central Sun show the accumulation and manifestation of powerful energies from the Spiritual World towards humanity. There is a sign that certain dark materialist circles of those in power will try to show their gross ignorance as an imposed new form of totalitarianism. It is about certain cliques and mafia political circles at the world level, which will try to make a complete restructuring of normal life and health into something completely inadequate and more terrible than the camps of National Socialism and Communism.

What's scarier? It is frightening in a free and democratic world to be considered normally insufficiently tested w^xsin to be applied on a large scale to people. This is a medical experiment that is unconstitutional if applied to the citizens of Bulgaria or any other free country. Poorly made and insufficiently tested w@@#@n can have permanent health problems, and in the most severe cases, young people are sterilized and they can no longer have children, and others simply die from a bad vaccine. For the first time, v@#@@ RNA was developed, which modified human DNA (as a kind of GMO manipulation, this time directly on humans) and led to the production of parts of the envelope of the virus. Thus, in addition to an immune response against the virus, an immune response against the protein Cincinitol-1, which is essential in the formation of the placenta in women, may develop. This would prevent the formation of the placenta, which would cause the injected women to become infertile indefinitely. A similar effect has already been observed in some versions of ^@xsina against polio. This is a serious threat to the National Security and Demography of any free country. The right non-totalitarian approach would be to test all these measures first at the level of the EU and Bulgaria and then to apply them only voluntarily to the population only if they do not have serious harmful results. Since no w@xsin RNA has been used so far, no one knows what the long-term effect of it will be on human health and life.

I say all this because the current solar eclipse on December 14 shows a serious medical danger for the entire planet, which is expected to unfold in the next 2 years, but will be launched + -2 months around the eclipse. This could be a disaster from the unwise use of an illegal medical experiment or the emergence of a new viral hazard. I also remind you of my forecast for March and June 2020: the horoscope of 2020 (as well as the horoscope of 2021 and the map of the Eclipse) show possible destructive for the whole planet phenomena coming from space or happening in the sky, and this affects: the fall of an asteroid , strange UFO sightings, a great danger to the ISS (this is already happening - Russia wants to leave the project) and last but not least the inclusion of 5G signals from Ellen Musk's satellites, which could lead to large-scale environmental and health problems for humanity and many species on the face of the Earth due to large-scale excess of electromagnetic radiation much above normal.

On the other hand, there is a serious seismic hazard for countries between the 60th and 70th western meridians, the 110th and 120th eastern meridians, as well as the countries of Mexico, India, Tibet, East China, the two Koreas, Japan and Indonesia. all listed is present CODE RED for seismic activity. Regarding the Balkan Peninsula, Bulgaria and our neighbors, I will say the following: there is a diagonal line passing through Belgrade, Skopje, Athens, the Eastern part of Crete and Egypt. Compared to this line, as well as to the range 20-23 eastern meridian, there is a seismic risk with ORANGE CODE, as well as risk for natural disasters related to the water element in winter conditions - very heavy snowfall and disaster situation, especially in the second half December. Regarding Turkey, as a whole series of seismic outbreaks have been triggered on its territory, the forthcoming series of eclipses could cause new serious earthquakes and that is why there is again a CODE for ORANGE for it. The danger is present for the period 12-19.12, as well as for the forecasted dates in September: 21.12, 30.12, 13.01, 21.01, 28.01, 11.02, 19.02, 27.02 + -2 days.

Personally, people who have a strong emphasis on this eclipse on their Sun, Moon, Ascendant, or important planet will experience major changes in their lives. They must protect their health through prevention and prudence, and at all costs avoid participating in medical experiments.

Fortunately, everyone can now check if they are affected by the solar eclipse thanks to the Astrological Internet Software - Astramen.com. If you click the button at the end of this article, you will be able to check the influence of the solar eclipse in your personal horoscope, if you have a registration on the site. You will receive a detailed and personalized analysis for you and your life.

People who have a negative or mixed-transforming influence must be in a state of prayer on the day of the Eclipse for themselves, their loved ones and Bulgaria, and the whole Planet, and people who have a positive impact must use the impulse of the Eclipse, for the clearing of life problems and unsolved tasks in their social and professional life.

A reasonable person keeps his health and freedom, because they are given to us by Christ!