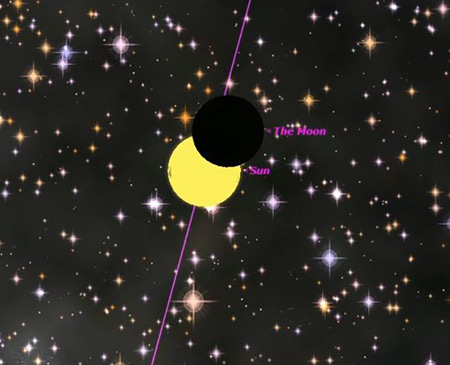 GLOBAL PROGNOSIS: A total solar eclipse occurs on June 21, visible from Africa and Asia. This eclipse occurs against the backdrop of the Milky Way, which crosses the Zodiac between the Cosmic Taurus and Gemini, right where the Weapon of Light and Justice of Osiris touches the Ecliptic. This is a special place, because in our present age there is the point of the Summer Solstice - the area that shows the Supreme Evolutionary Goal of Humanity in our time. In the same place is the projection of the star Betelgeuse, which has a powerful Martian influence on the world and humans, and which first showed the sign of the Pandemic by a sharp decrease in its luminosity, which puzzled the world of science. This eclipse was preceded by Venus' Eclipse - the disappearance of Venus behind the moon's disk during its Last Crescent on June 19, and this further emphasizes the essential significance of the Celestial Signs. (For more on this topic, see HERE ) Obviously, the cosmos is preparing us for epoch-making events, which will again change all of humanity.

As Venus disappears before the Sun disappears, there will be a disappearance of people's love for a political leader. This is very serious about President Trump, who will go through a serious battle to win the next election. Unfortunately, there is a danger of a US Civil War if a paid fanatic takes the life of a president who wants to end the era of America's endless wars forever. But on the other hand, this eclipse shows that if Trump wins, he will have very little, and then he will be able to make important reforms, and imprison a number of dangerous criminals who threaten all of humanity.

This eclipse indicates the danger of a war between Iran and Israel, supported by the United States, two to five years after the celestial sign - a war over the creation of nuclear weapons by the Islamic State. The eclipse also shows a serious escalation of tensions between a number of Asian countries - between India and Pakistan, between India and China, between China and Hong Kong, between North and South Korea, and some of these tensions could escalate into short or more serious hostilities. It is clear that after the US elections, China-US relations will enter into serious critical situations and China will have to be responsible for the emergence of the manipulated Coronavirus.

On the other hand, this year's horoscope and the summer solstice horoscope show many dangerous events. Possible destructive phenomena for the whole planet coming from space or happening in the sky, such as: falling asteroid, strange UFO phenomena, great danger to the ISS and last but not least the inclusion of 5G signals from Ellen Musk's satellites to lead to large-scale environmental and health problems for humanity and a number of species on the face of the Earth due to large-scale exceedance of electromagnetic radiation far above the norm. There is a clear signal of non-standard military action, reaching real conflicts between large countries, such as those of particular strength to China and the United States on the one hand, and to Iran and Israel or India and Pakistan on the other. Turkey will challenge a number of countries with its behavior, and this will not go unnoticed by the Great Powers. Unfortunately, tensions between Greece and Turkey could escalate sharply over the centuries-old confrontation. The conflict with Syria and even Israel is yet to come. All this military danger is shown in the horoscope of the Eclipse and the horoscope of the Summer Solstice, and there is an additional sign - the presence of Mars in the tropical sign Aries 6 months, which last happened in 1941 - the critical year of World War II.

Mankind needs very sensible and spiritually developed leaders if it is to overcome military and political confrontations. Millions of people need to unite in a Collective Prayer for Peace, Evolution and Salvation of Humanity in order for the Human Race to have a chance and harmonious development in the Age of the Second Etheric Coming of Christ in human souls.

The solar eclipse will cause serious seismic activity with CODE RED in the period 16-25.06 (the most critical days are 18-22.06), with the most affected countries: Afghanistan, Pakistan, India, Tibet and China, through which it passes the shadow of the Eclipse. The United States and Mexico receive the ORANGE CODE + -5 degrees around the 100th western meridian, and Italy, Greece and Turkey receive the YELLOW CODE. Bulgaria also receives a YELLOW CODE compared to its central regions, but rather this celestial event shows rather surprising and serious political changes and the danger of aviation and energy or gas distribution accidents or explosions in Central Bulgaria during the lunar month beginning after the eclipse.

Personally, people who have a strong emphasis on this eclipse on their Sun, Moon, Ascendant, or important planet will experience major changes in their lives. They must protect their health through prevention and prudence, and they must avoid family or clan conflicts at all costs.

Fortunately, everyone can now check if they are affected by the solar eclipse thanks to the Astrological Internet Software - Astramen.com. If you click the button at the end of this article, you will be able to check the influence of the solar eclipse in your personal horoscope, if you have a registration on the site. You will receive a detailed and personalized analysis for you and your life.

People who have a negative or mixed-transforming influence must be in a state of prayer on the day of the Eclipse for themselves, their loved ones and Bulgaria, and the whole Planet, and people who have a positive impact must use the impulse of the Eclipse, for clearing life problems and unsolved problems in their social and professional life. In general, all people should pay more attention to their family and clan in the period 21.06-21.07.

The rational man observes the universe and learns from the Infinite Wisdom of Christ!