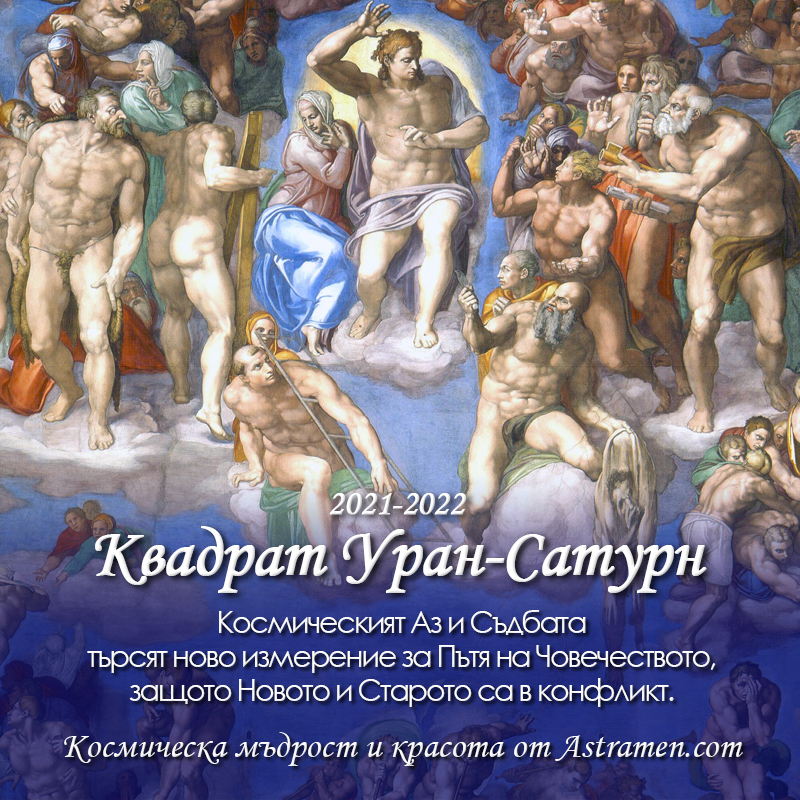 RELATIONSHIP BETWEEN TWO BASIC PLANETS HAVE DETERMINED THE ENTIRE HISTORY OF BULGARIA, THEY WILL DETERMINE 2021 AND 2022 FOR THE BULGARIAN PEOPLE: The planets Uranus and Saturn enter the 90th year this year. This is a sign that the new and the old are in serious conflict. Chaos and order face each other in a head-on collision. Revolution and stagnation measure their strength. Freedom and slavery are in a deadly battle. But above all these confrontations, the Cosmic Self and Fate seek a new dimension for the Path of Humanity. It is for this reason that I have chosen Michelangelo's The Last Judgment, which clearly shows how Christ, the Self of Mankind, seeks a solution to a very complex problem surrounded by the manifestations of humanity.

In a more elementary geopolitical sense, the conflict between Uranus and Saturn shows that some abrupt changes and unforeseen processes can come into serious conflict with the political foundations of states and supranational organizations - internally by the peoples themselves and / or externally to the borders. of these national and supranational structures. Mass relocations will attack the borders of states, but military conflicts will also confront the status quo. There will be natural disasters, earthquakes, hurricanes and volcanic eruptions, through which Nature will still try to educate humanity. There is a tendency to impose a new global financial order, following unpredictable and surprising events or planned bankruptcies of huge institutions and even countries that can be masked by skillfully exporting the problem elsewhere, such as throwing a hot card at the hands of global speculators. to the hands of ordinary people.

The relationship between Saturn and Uranus determines one of the most important cycles for Bulgaria, because these two planets coincide every 44-45 years. The last three coincidences took place in 1897, 1942, 1988, and the forthcoming new coincidence will take place in 2032. Every key aspect between the two planets has determined the destinies and spiritual development of our people, including the restoration of our ancient Esoteric and Astrological tradition by Master Peter Deunov and his special mission to Bulgaria.

In a personal context, the tension between the two planets creates one of the most important processes of the year for all people with important cosmic factors in the first 2/3 of the fixed zodiac sectors - Taurus, Leo, Scorpio and Aquarius. There is a tendency towards complex socio-political processes or life-professional processes, which require from every reasonable individual careful mastering and correct behavior. For some people, this tense aspect will create a need for change, and for others serious trials, for others it will help by changing the external conditions. If you want to check specifically what is the astrological situation in your entire horoscope, and not just in relation to your zodiac sign, click on the two buttons below and check in what position your overall horoscope is in relation to the square between Uranus and Saturn the first two moments, now in February and then in June 2021:


In order to illustrate in great detail the processes referred to above, I will quote the material of my friend and colleague Radislav Kondakov, who studied the influence of the cycle of Uranus and Saturn in the history of Bulgaria. You will find more interesting materials and articles from him on his website: http://bogatstvo.net. And here is his article on the topic:

ARTICLE: The Powerful Influence of Saturn and Uranus in the Bulgarian Spiritual Culture and Destiny. Past, present and future.

The cycle of Saturn and Uranus is very closely connected with the spiritual history and development of the Bulgarians, deeply marks their fate - both good and bad. But we really should not talk only about spiritual peaks, development and culture. No. Even the very survival, existence and liberation of Bulgaria - and they are connected with Saturn and Uranus in a dramatic dance on the stage of life.

And this dates back to the deepest antiquity, from the time of Orpheus, but we will not dwell on it - the teachings of the great Thracian will not find a place in the list below of the exceptional events related to Bulgaria.

These phenomena and events related to the aspects between Saturn and Uranus are key not only for the Bulgarians and their mission and task, they are much more fateful and deep than they may seem at first glance.

But let's trace some of them chronologically:

Saturn trine Uranus 928 - In the spring of 928 in the dungeon of the monastery of St. Paraskeva, Boyan Maga, Patriarch Stefan, Presbyter Jeremiah-Bogomil, Simeon Antipa, Vasily the Byzantine, Gavriil Lesnovski and two unknown Syrians set the beginning of Bogomilism. Its spark ignites the torch of all of Europe and gives us the Renaissance.

Saturn Square Uranus 933 - The beginning of the persecution against the Bogomils. 17 of the drivers were killed in the cold dungeons of Preslav, subjected to indescribable torture - pricking eyes, burning with hot tongs, nets of red-hot nails on the back and chest, chaining in hot iron boards, cutting with a grater, pouring molten metal into the ears , removing nails with pliers… The list is long and terrifying.

Saturn semi-sextile Uranus 1211 - The Council against the Bogomils, convened by Tsar Boril.

Saturn conjunction Uranus 1762 - Paisii Hilendarski wrote "Slavo-Bulgarian History" in 1762. History has a key role in awakening the Bulgarian consciousness, in preserving the Bulgarian language and preserving us as a people. In the same year, in the town of Kotel, he was ordained a priest, Sofroniy Vrachanski, who continued the bright work of Paisius.

Saturn conjunction Uranus 1807 - the Russo-Turkish War (1806-1812) broke out, which brought rise and hope to the Bulgarians for liberation. Emigrants in Romania also formed volunteer detachments to help the Russians, who took Silistra and headed for the Balkans. The intervention of France and Britain persuaded Russia to sign the Bucharest Treaty, which ignored the Bulgarian demands formulated by Sophrony of Vratsa.

Saturn opposition Uranus 1829 - the next Russo-Turkish war is a fact.

Saturn square Uranus 1860 - a major military conflict between Serbia and Turkey with the participation of Bulgarian rebels.

Saturn square Uranus 1885 - the Serbo-Bulgarian war, which Bulgaria won but received nothing. On September 6, 1885, the Union of Eastern Rumelia with the Principality of Bulgaria took place. The third square of Saturn with Uranus on April 29, 1886 caused a coup and abdication of Prince Battenberg on August 26, 1886. Ferdinand Coburg-Gotha, who created many troubles for the Bulgarian people, was elected Prince of Bulgaria.

Saturn conjunction Uranus 1897 - At the age of 33, Master Peter Deunov received the Spirit of God. In 1897 the Master also established a Society for raising the religious spirit of the Bulgarian people.

Saturn trine 1912 and 1913 - Master Peter Deunov compiles the "Covenant of the colored rays of light" in Arbanassi. He mystically arranges verses from the Bible to suit different colors and virtues.

Also in 1912, Bulgaria, Serbia and Greece declared war on Turkey and won it.

Unfortunately, in 1913 the Inter-Allied War began, which ended catastrophically for Bulgaria.

March 16, 1914 - delivered in Sofia the first (officially transcribed) Sunday talk "Here is the Man" with which he started the series "Strength and Life". It sets out the basic principles of the teachings of the White Brotherhood.

Saturn Opposition Uranus 1918 - The teacher was interned in Varna on charges that his Teaching shook the spirit of Bulgarian soldiers during the PSV. He lives in the London Hotel and keeps in touch with his students. In 1918 the war ended, which was associated with extremely severe consequences for our country. Ferdinand abdicated in favor of his son, Boris III.

Saturn Square Uranus 1999 - In another conversation in 1939, Master told his students that if they failed to use the favorable conditions now, they would not be available until 1999.

Saturn Square Uranus 2021 - Here we are. In my article on the squaring between Saturn and Uranus, I presented my thesis on the changed influence of the aspect after 1975, and this change is positive for all reasonable people who work on their character, abilities, qualities and virtues. For all people who know that we are here and now to learn deeply and seriously (Saturn) by learning new lessons and ways of thinking (Uranus). Unity (Uranus), based on a solid foundation (Saturn).

In fact, understanding the principle and nature of influences in astrology, and in life, is key to penetrating this profound science. The planets and lights influence us and our task is to strengthen their positive qualities, as well as to adequately deter and transform the negative ones.

But do they always affect in the same way? Doesn't the law of evolution whisper to us that their effects are also changing and evolving? And don't we influence them too (it would be fair)?

The short answer is yes. The detailed answer will be the subject of a separate article, but I will still mention that as we humans evolve, become better and more intelligent, the influence of the Earth in the horoscope of the warlike Martian or good-natured Jupiter improves.

It's no coincidence that in the past some planets were sharp and definite malefics (I won't mention Saturn and Mars, so as not to offend), and now we accept them much more warmly.

It is no coincidence that Rudolf Steiner speaks of the mission of Buddha on Mars (similar to Jesus on Earth), in which this spirit shows them a new path of non-violence and mercy. And that since then the influences of Mars in the horoscope have been far more harmonious. But for the philosophy of astrology - another time. Just a quote from Master Peter Deunov (I can't help it):

"You study astrology, but do you know what mutual influence exists between the planets themselves? You say that the planets affect man. That's right, but the same planet in just one year has a different effect on a person. Why? Because there are different changes in it as well. ”

I stop with the careless diversion from Saturn and Uranus, and only to end with my firm conviction that all these events and happenings are for the better, even when it at least seems to us to be so.

And that whatever happens (or does not happen) in 2021, it will be important for us - the Bulgarians. And not only.