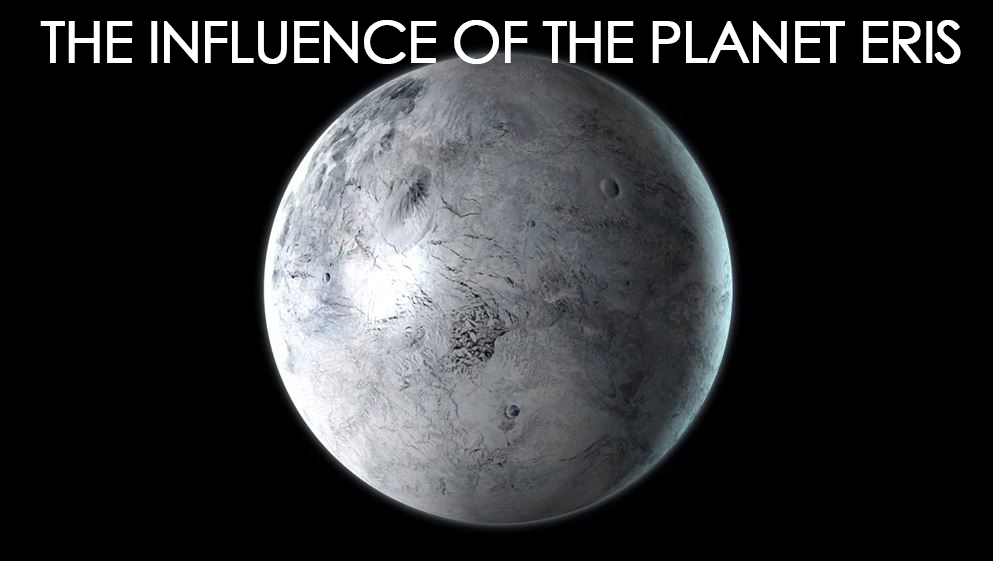 THE INFLUENCE OF THE PLANET ERIS

Relatively recently, the planet Eris has become part of the solar system family and thus it has also entered the astrological life of humanity and the individual. When a planet is first discovered we experience an expansion of our horizons and the inclusion of new energies and processes in our Star Charts. Eris is a special planet that is associated with the sister goddess of Mars who was neglected at a feast of the gods. She decided to take revenge by creating a golden apple to toss secretly at the gathering of the gods, with the apple inscribed "to the most beautiful" and on the other side, "to the wisest". The goddesses Hera, Aphrodite and Athena began to argue about which of them the Golden Apple was. The Trojan War arose out of this dispute through Paris' decision of which goddess to give the Golden Apple to - the one who would give him the most beautiful woman for a beloved, or the one who would give him kingship, or the one who would make him a great and wise warrior. It is clear from this parable that Eris does not merely create intrigue, but she is connected to those events coming into the human world to express karmic processes that are not comfortable or pleasant. She brings those things that are forgotten, and should not be forgotten. It is a reminder that every single being and archetypal principle of the universe must be honored, and whenever this honoring is not present a serious problem arises that can even lead to the ignition of the outer or inner world by a horrific war. It is at this time, when Eris is involved in a Grand Square with Pluto, the Sun, Venus and Lilith, that her influences come into our lives to remind us of what has been forgotten by humanity and the individual. People and nations have become caught up in monotonous experiences and so have fallen asleep in an illusory reality, forgetting their primal Divine nature. This sleep must end. And it will come to an end through a wise awakening and a liberation of the mind from illusions or through serious trials that are not at all pleasant. The choice is in the hands of each one of us.

Right now, as the Venus-New Venus phase is about to begin on 10/22, when Venus is conjunct the Sun to conceive a new Venus cycle, and just 3 days before the partial solar eclipse on 10/25, the opposition of the Sun and Venus conjunction to Eris, which is at 24 degrees tropical Aries, is taking place, and while Pluto is completing this opposition to a right triangle - Tau Square. It is at such times that people can quite distinctly experience the influences of Eris as if in terms all too similar to the very parable describing the actions of Mars' sister. This opposition of Eris to Venus taking place literally in the last days before the conception of a new Venusian cycle is all too reminiscent of Eris' quiet provocation of three manifestations of the feminine archetype: the goddess Hera, the woman of power and control, the goddess Aphrodite, the woman of beauty and love, and the goddess Athena, the woman of wisdom and war. Pluto's intervention is alone to focus and strengthen Eris' influence by creating a large-scale realization of her conspiracy and unleashing her influences on a planetary level. Relative to the individual and his horoscope, this Rectangular Triangle or Grand Square falls in certain houses of the horoscope or affects specific planets. In such a case, one can experience precisely on the themes of these houses and planets the strong influence of Eris. This is a very important experience that comes to man to show him what not to forget and where to be awake and aware.

If you want to check where these intense energies fall in your horoscope, use this link: https://astramen.com/k/1262896 and especially in the period 15-20.10 be more careful and wise towards the houses that are affected by the complex configuration described above.

Study Astrology consciously to earn the name Human in the face of the Universe.