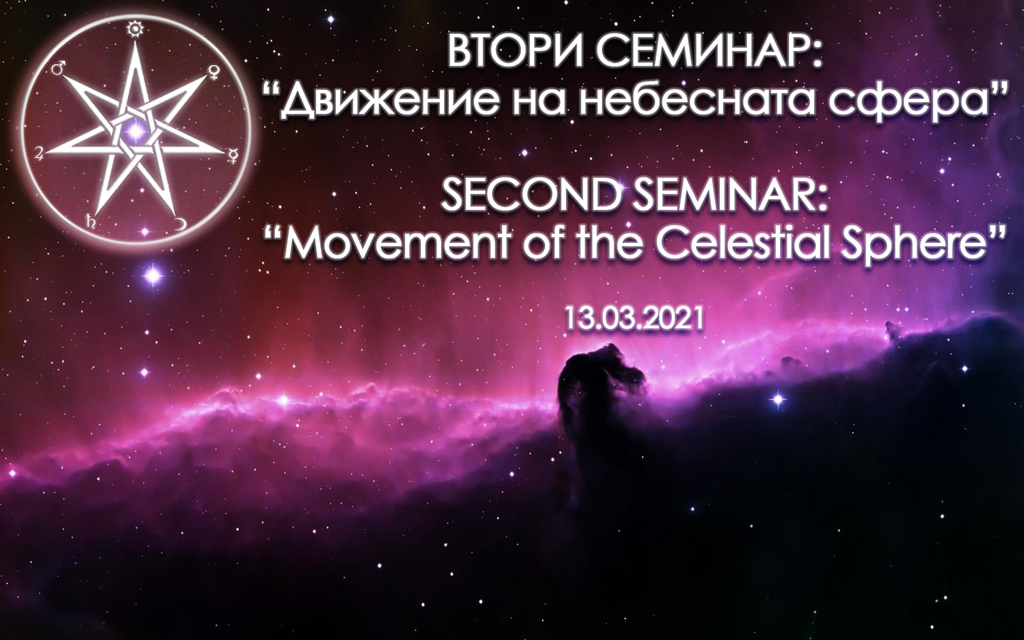 02 - MOVEMENT OF THE CELESTIAL SPHERE

On March 13, 2021, Filip Filipov gave a 2-hour second seminar on the topic: "Movement of the Celestial Sphere", with the subtitle of the seminar being "Dynamics of the Solar System - Three Perspectives". In this practical seminar, the movement of the planet Earth, viewed from space and then viewed from the surface of the Northern Hemisphere, was visualized and explained. An explanation was given of what the "counterclockwise" direction of the Earth means and what the "clockwise" direction of the celestial sphere in a southerly direction in the northern hemisphere means. Along with this, the three areas of the sky were shown, which were observed by the Ancient astrologers and are of great importance to this day: Divine area from the sky - symbolizing Eternity; The manifested area of ​​heaven, where things pass through the cycle of birth, manifestation, attenuation and death, and then again to a new birth ...; and the Unmanifested realm of heaven. Along with these three areas, the meaning and significance of the 7 directions from the Celestial Sphere were given. Then the movement of the Sun during the day and during the year is examined in detail, explaining why the seasons occur and what the energy is during the diurnal cycle. The three Divine ways in the Astrology of Ancient Sumer were visualized and explained - the Way of Anu, the Way of Enlil and the Way of Enki. It was shown and explained how the Heliocentric point of view is suitable for solar horoscopes, but not suitable for Earth Astrology. It became very clear why the Geocentric System is the right system for Earth Astrology, due to the fact that we live our physical life on Earth and not on the Sun. The Galactic-centric point of view, or in other words, the Alfiolocentric point of view on the dynamics of the solar system in our Galaxy and its Central Sun - Alfiola, was also explained and visualized. You will find a more detailed explanation, interpretation of the meaning and visualization on the movements of the celestial sphere and the different views of the Earth and the Cosmos in the video of the Second Seminar. Enjoy watching!