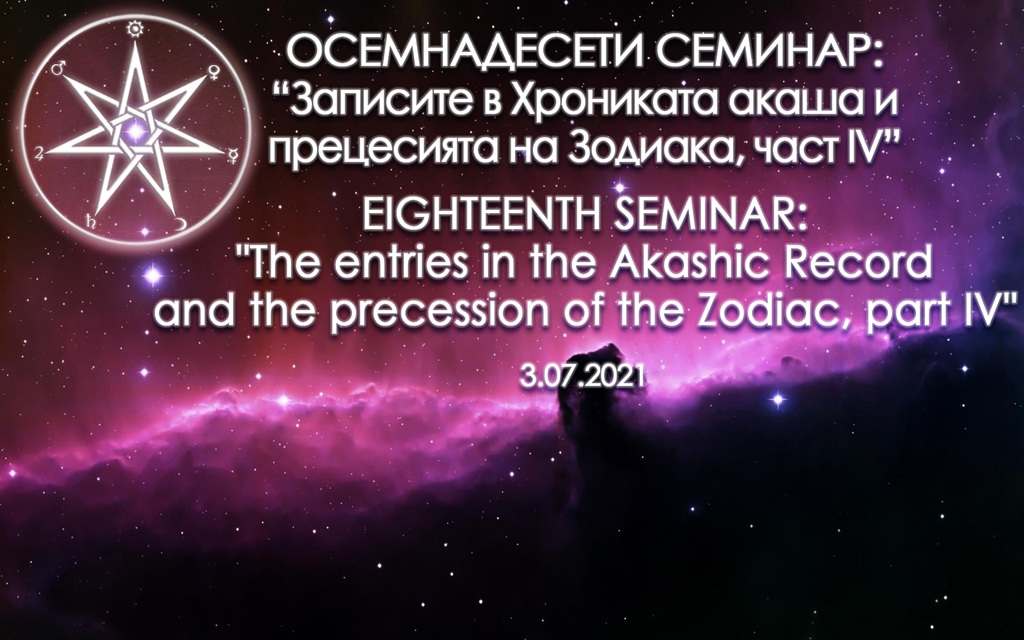 18 - THE ENTRIES IN THE AKASHIC RECORD AND THE PRECESSION OF THE ZODIAC, PART IV

On July 3, 2021, Filip Filipov will hold a seminar on the topic: "Records in the Akashic Record and the Precession of the Zodiac, Part IV". The seminar will present the Precession Record in the Akashic Record about the Zodiac for future great epochs and sub-epochs of the Earth's development. The precession processes and dynamics invested in the Earth's existence will be shown in detail. The fractal structure of time and the seven degrees of Consciousness, Life and Form, the seven rebirths of the Solar System, the seven Great Ages in the development of Physical Form, the fourth degree of Life from the Aeon Earth, which is the fourth degree of Consciousness, will be explained. Special attention will be paid to the Future Sixth and Seventh Great Ages and their 7 Cultural Ages, explaining what is given on the subject in Esoteric Christianity and the records of the Akashic Record. The deep astrological meaning embedded in Joan's Apocalypse will be shown, using Rudolf Steiner's interpretation as a basis, but some new ideas presented for the first time will be demonstrated. Information will be given about the coming two great epochs - the Sixth and the Seventh, which are described by the Apostle John as the Seven Seals and the Seven Trumpets. By examining the already cited Precession Ages, it will be shown how the Spiritual World invests layers of information, archetypes, functions, processes and qualities in each constellation of the Father Zodiac - the Star Fixed Zodiac. Information will be given about what two points of view are there in understanding and measuring the Precession Ages ... Welcome to the seminar!