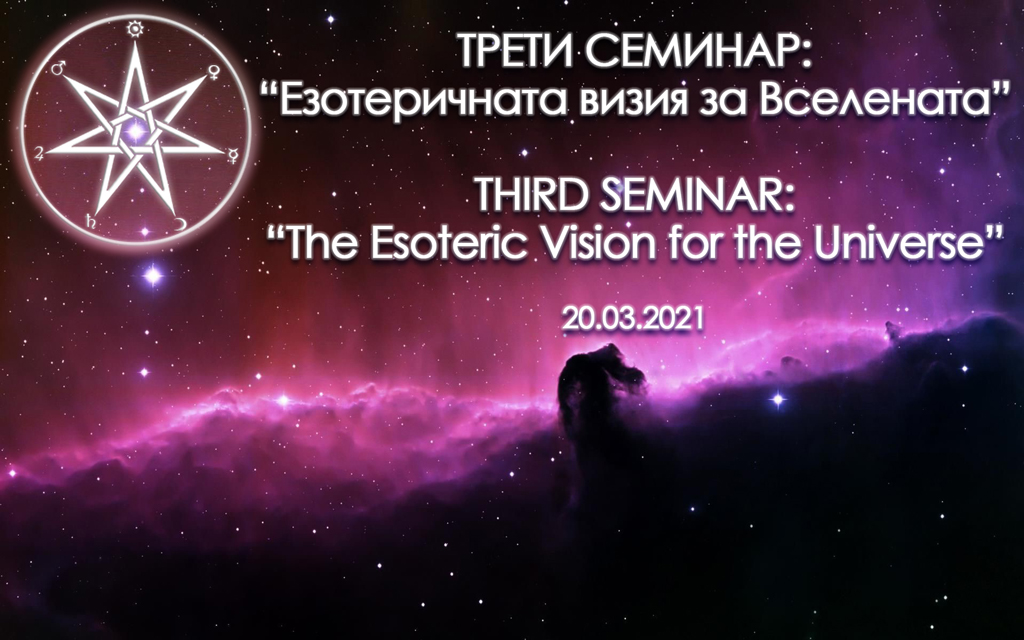 03 - THE ESOTERIC VISION OF THE UNIVERSE

On March 20, 2021, Filip Filipov gave a Third Seminar lasting 2 hours and 15 minutes on the topic: "The Esoteric Vision of the Universe". This seminar had three main parts - an explanation of the materialist concept of the Universe, showing the serious shortcomings and weaknesses in the thinking of people working on the topic, as well as the positive contributions of scientists in the field of cosmology and astrophysics; in the second part - Empirical experience of an Element from the Universe; and in the third part - the Spiritual and Esoteric vision of the Universe. The seminar traced the hierarchy of structures in the universe, understanding its self-similarity or, in scientific language, its fractal hierarchy. It came to the conclusion, after observing and comprehending some facts, that man is a small but still huge universe with trillions of beings in it. The historical contributions and visions of the Universe of Buddha, Pythagoras, the Hermetic and Christian Esoteric Tradition, Giordano Bruno and Leibniz were traced. The idea was reached that the Universe is a living Being, Who has Consciousness, and this Consciousness has been called by humankind - God for thousands of years. In scientific terms, the idea that the Universe is a self-similar reality with a fractal dynamic hierarchy and holographic nature, which concept provides a solid basis for the scientific justification of Astrology. It was pointed out that the Universe has at least the following 4 levels - categories: matter, energy, information, consciousness. Clear parameters were given for the three types of Cosmic Human Beings, as well as for the so-called Nation of Cosmic People. The Cosmogonic vision of the Three Logoses - the Three Faces of God, known as God's unity of the Holy Trinity - was traced. You will find a more detailed explanation of the Esoteric Vision of the Universe in the video of the Third Seminar. Enjoy watching!